If you are a GOpher or a wanna be GOpher don’t miss the talks at Codemotion Milan 2016!

Go (Golang) is an open source programming language created by Google in 2007, and in the last years its usage is growing. It started as an experiment at Google, the goal was to design a new programming language that would resolve common criticisms of other languages while maintaining their positive characteristics: be statically typed, scalable to large systems, be productive and readable, support networking and multiprocessing. Lots of companies and professionals alongside other languages and platforms. The fact that GO is gaining momentum is also clear from the 2016 O’reilly survey, where it indicates that GO is the first language developers are willing to learn. 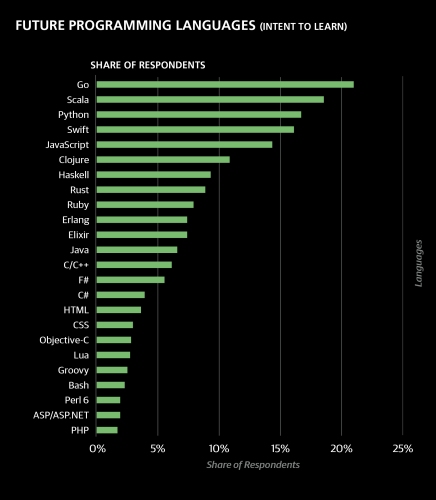 Codemotion decided to give some space to this powerful language during the conference in Milan. It will be a small journey, starting with an overview of the language, how to develop in GO and some really interesting real use cases.

Florin Patan – Getting started with GO
This talk focuses on people which are interested the Go programming language and want to learn it. In it I will present the various resources new gophers have to learn Go, what are the usual pitfalls and how to get help when they are stuck

Eleanor McHugh – Going Loopy
An exploration of Go through the lens of a very simple task: iterating through a sequence of values. Starting with the basic C-like semantics of Go’s for {} loop construct we’ll then build through user defined types, type assertions, closures, channels and reflection to demonstrate generalised concurrent iteration. By the end of the talk we’ll have covered all of Go’s core language features. No familiarity with Go is required.

Giulio De Donato – Creare Docker da zero con Golang (in Italian)
A journey to explore the Linux kernel features used by Docker. Giulio will show how easy and simple is to create CGroups on a Linux box to get in control of a process, how to manage filesystem branches and so on and so forth. Everything will be glued together with GO.

Maurizio De Gregorio – We started with RoR, C++, C#, nodeJS and… at the end we chose GO
Maurizio and his colleague are going to share how they built a service that can generate million of transactions in short period of time, even few seconds. They started the API backend with RoR on a robust cloud service. They had few customers at the beginning and few transactions. Then, before starting the first big event they made some load test, and they understood that they needed better performances. They changed the platform many times: servers, languages from RoR, C++, C#, C# mono, to Go. And they stick with it.

Paul Bellamy – How To Structure Go Applications
For developers used to working with frameworks like Spring, and Rails, Go’s lack of advice on how to structure your application can be bewildering. Many new developers, reach for their favorite Spring, or Rails equivalent, and rely on its structure, but that is a mistake! Go gives us wonderful tools to put Domain-driven design into practice, and create beautiful applications. You’ll learn why MVC is a bad fit, why splitting your code up by component makes sharing code hard, and the way you should be structuring idiomatic programs in Go.

Ivan Daniluk – Visualizing Concurrency in Go
One of the primary strengths of Go programming language is a built-in first-class support for concurrency. We’re going to learn about it in a completely new way, using interactive 3D visualizations, which help us understand the complex but astonishing world of modern concurrent software. We’ll see what’s happening inside the real code—from a simple “Hello, World” to real production-level high-loaded servers, and learn different approaches and concurrency patterns that are used for building concurrent pipelines and algorithms. And we’ll do it all in 3D!

Again: if you are a GOpher or a wanna be GOpher don’t miss these talks at Codemotion Milan 2016!